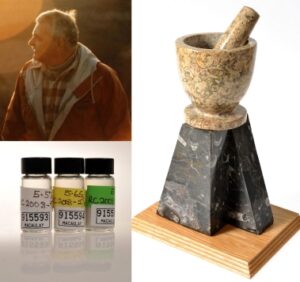 The Reynold’s Cup Competition is open to anyone interested in quantitative mineral analysis, with particular emphasis on clay mineralogy. Information about the competition including guidelines and previous winners can be found here on the site. The competition is free for all to enter, however, those that are not members of the CMS are encouraged (but not obliged) to become members (click here for details on the benefits of membership).

The Reynolds Cup competition, named after Bob Reynolds for his pioneering work in quantitative clay mineralogy and his great contributions to clay science, was established in 2000 by Douglas McCarty and Jan Srodon of ChevronTexaco and Dennis Eberl of the United States Geological Survey (USGS). Unlike other round-robin events that used well-ordered, high-symmetry phases (Madsen et al., 2001) or splits from natural samples with unknown mineral composition (Ottner et al., 2000), the Reynolds Cup competition utilizes mixtures of pure standards that represent realistic sedimentary rock compositions. The first RC competition opened early 2002 and samples were made available to individuals in commercial, industrial, government, or academic laboratories, which could use any method or a combination of methods to obtain the most accurate quantitative phase analysis. Three samples each were given to a total of 40 participants. The TOP-3-finishers were presented with plaques and the champion’s trophy went to the first-place finisher. The competition was sponsored by ChevronTexaco and the trophy was donated by the USGS. The success of this competition encouraged the founders to make it a biennial event. The Reynolds Cup competition is now funded by the Clay Minerals Society CMS and the German-Austrian-Swiss Clay Group DTTG. The competition is free for all to enter. However, those that are not members of the CMS are encouraged (but not obliged) to become members.